What is Software Reporter Tool and How To remove it?

What is Software Reporter Tool?

I bet that everyone who had done some business online had come across Google chrome. It’s an irresistible part of the internet. Nearly 65% of people use Google Chrome as their primary browser followed by Safari which stands at 15% in market share. It’s one place for web Browsing, but it’s not just an application to get a mind-blowing browsing experience. It has many unique features that led it to become one of the most trusted applications in the internet world. Google Chrome operates through a number of programs and the Chrome Software Reporter Tool is one of them. The Chrome software reporter tool is a very important part of the Chrome Browser. And it comes with the Google Chrome package so one doesn’t need to install it separately. This executable file is called the software_reporter_tool.exe.

Chrome Software Reporter Tool is the part of Google Chrome Cleanup Tool. It monitors the Google Chrome installations and reports if any other component is interfering with the process. These kinds of programs are also used by other browsers to monitor any possible threat the installations might face. It helps eliminate this risk by identifying conflicting software programs.

If you are not computer savvy then there is a chance that you may have never come across this tool. Well, it’s not your fault this tool doesn’t cross your eyes easily unless you intend to see it. You can find this 54 kb executable file by going to this following path through your RUN dialog box: 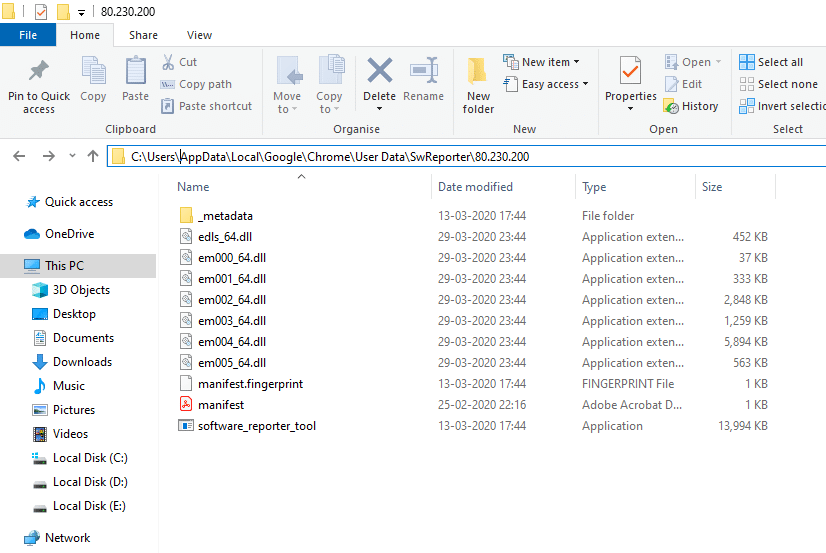 The above Image shows the opened location of the file, and the number 80.230.200 refers to its version. The Software Reporter Tool runs once a week and sends the gathered data to Chrome. The main aim behind the operations of Software Reporter Tool is to find any conflicting software that might interfere with the Chrome application and ruin your browsing experience. It also reports Chrome about unwanted advertisements and browser crashes. By these reports, Google Chrome decides whether it’s time to run the Chrome Cleanup tool or not. And if the problem is huge then Chrome prompts the user to run this feature.

Nowadays, most of us have shifted towards the Windows 10 operating system from Windows 7 and XP. This is because it’s less vulnerable than its precursors and works very smoothly with almost any configuration. But it still isn’t immune to all the problems. Windows 10 also face Software Reporter Tool High CPU Usage related issues which, makes it slow to use. Many of you might have noticed through the task manager that the Software Reporter Tool (software_reporter_tool.exe) is running in the background. During which your computer becomes very slow. 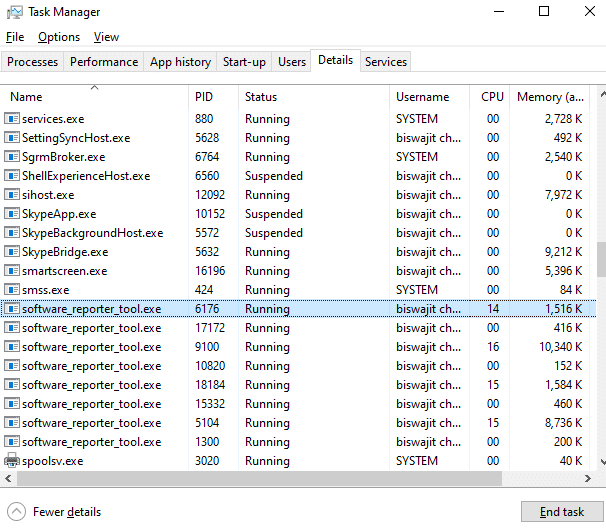 From the above image, you can see that there are eight software_reporter_tool.exe files running. Well, this is the executable file you can find the real name from the description which is Software Reporter Tool.

And as you can see from the picture this task has consumed an enormous amount of CPU memory. And sometimes it can even consume more than 70% of your CPU memory depending on the work. As many people are unaware of this executable they think of this as malware and try to solve this issue with antivirus but it is completely the opposite.

The Software Reporter Tool and Chrome Cleanup Tool are very much similar. One finds harmful apps and extensions which could prevent Chrome from doing its work and another removes those apps to prevent them from doing so. It is a very useful way to get rid of any harmful software and malware without adding any additional level of security.  Previously one had to separately download the Google Chrome Cleanup Tool to implement this method but, now Google has integrated it into the Chrome system. So, if you ever feel that your browser is having some issue then you can simply use this built-in tool to solve that problem. Just follow these steps to manually activate this tool:

Step 1. Open the Google Chrome Settings and go to the Advanced option.

Step 2. Then scroll down and go to the Reset and clean up section.

Step 3. Now click on the Clean up computer option.

Step 4. On the next page, you will find an option named Find harmful software just click on the ‘Find’ button.

It will find all the harmful software programs from your computer and will remove them all. You can also uncheck the box below saying Report details to Google if you don’t wish to send the reports to Google.

Following Are The Pros and Cons of Software Reporter Tool:

I think from the above discussion we have completely cleared the pros and cons of the Software Reporter Tool. It has some advantages which could surely enhance your browser experience. But as it is clear from the above discussion it has some really big problems. In times the Software Reporter Tool can run for more than 20 minutes continuously which could hugely slow down your computer.

How To Disable or Remove Software Reporter Tool:

Step 3. Now under the Policies key, create a new key and set its name as Google

Step 4. Then under this Google key, create another key named Chrome

So, the final key path will look like this:

Step 5. Now select the Chrome key from the right panel, then right-click on it and select New > DWORD (32-bit) value option. Then change the new DWORD name as ChromeCleanupEnabled

Now create a second DWORD and set its name as ChromeCleanupReportingEnabled

Remember to keep both of the DWORDs value to 0

The command ChromeCleanupEnabled will prevent the Software Reporter Tool from scanning the computer.

And the Command ChromeCleanupReportingEnabled will exempt the Software Reporter Tool from sending any scan results to Google.

Now in future if you decide to restart the services of Software Reporter Tool then just delete the DWORDs created in step 5.

There is another way in Windows Registry Editor by which you can easily Disallow the Software Reporter Tool from running in the background. Here we will use the DisallowRun Key to execute this method. Just follow the following steps to do so.

Step 3. Now under the Policies key, create a new key and set its name as Explorer

Step 4. Then under this Explorer key, create another key named DisallowRun

So, the final key path will look like this:

Step 5. Now select the DisallowRun key from the right panel, then right-click on it and select New > String value option. Then change the new String name as 1

Step 6. Now Double-Click on this string 1 and and and change its value to Software_Reporter_Tool.exe

Now you are all set this procedure will prevent the Chrome Software reporter tool from running in the background.

Note: In future if you decide to enable the Software Reporter Tool just delete the String 1 mentioned in step 5.

Now Windows Registry Editor has another option to Disable the Software Reporter Tool. Here we will use Image File Execution Options to complete this task.

Step 3. Now under the Image File Execution Options key, create a new key and set its name as Software_Reporter_Tool.exe

Step 4. Then under this Explorer key, create a new String and set its name to Debugger

Step 5. Now Double Click on this Debugger String and change its value with any suitable program’s path value that you would like to run in place of Software Reporter Tool.

Like, if you would like to run Microsoft excel instead of Software Reporter Tool then just change the value of Debugger to excel.exe.

Note: Now in the future if you decide to re-enable the Software Reporter Tool then just delete the Software_Reporter_Tool.exe key.

This step will be very helpful for those people who don’t have proper knowledge about Windows Registry Editor. This method will help you to prevent the Software Reporter Tool from running in the background and sending the scanned reports to Google.

Step 1. Open Google Chrome and go to the Main Menu (Click on the 3 dots icon at the top right to do that)

Step 2. Then click on the Settings option from there.

Step 3. From there go to the Advanced option appearing at the bottom.

Step 4. Here at the System section, you will find an option saying Continue running background apps when Google Chrome is closed just turn it OFF.

Step 5. Now under the System section, there is a Reset and clean up section, and under this section, you will find the Cleanup Computer option Click on it.

On this Cleanup page, you will see an option saying “Report details to google about harmful software” just uncheck this box.

This process will prevent the Software Reporter Tool from running in the background and sending the scanned results to Google.

You can also replace the software_reporter_tool.exe file with some other executable file.

And to do this open the folder containing software_reporter_tool.exe file. You can do this by doing the following steps:

Press the WIN+R keys together to open the RUN dialog box then type the following text in there and press Enter:

It will open the SwReporter folder and just open that version number folder and you will find the software_reporter_tool.exe file.

By doing this now whenever software_reporter_tool.exe will try to execute Excel or Outlook will launch which will prevent the Software Reporter Tool from running.

If you don’t want to replace the Software_Reporter_Tool.exe executive file with some other file and would like to simply delete it then just follow the below steps:

Step 1. Open the folder containing the Software_Reporter_Tool.exe file by performing the above mentioned steps.

Step 2. Now select the Software_Reporter_Tool.exe file and press the delete button from your keyboard.

But remember that it will not be a permanent solution because, when Google Chrome will update to a newer version it will automatically create a new Software_Reporter_Tool.exe file in this folder.

This is the absolute solution to block or disable the Software Reporter Tool from running in the background. We will do this by simply removing all the permissions from the folder containing Software_Reporter_Tool.exe file. This way Google Chrome will not be able to access this file which means the newer versions of Google Chrome will also fail to find this Folder.

You can do this by performing the following steps:

Step 3. Now go to the security as mentioned in the above image and click on Advanced option.

Step 4. Now you will get the Advanced security settings window, just click on the Disable inheritance option mentioned below:

Just click on the Apply button and this will remove all the assigned permissions from this folder. Then confirm the dialog boxes which will appear next. And now you are all set the Software Reporter Tool will be unable to run on your computer now.

Note: In the future, if you decide to grant permission to it then you can do that in this similar way, but this time just enables the permission section.

5 / 5 ( 5 votes ) PUBG Mobile is a legendary game for the mobile which is free to play, different from the PUBG PC version. Most gamers try to play on PC using Read more…

How to download and install PUBG Mobile VN on Gameloop

5 / 5 ( 4 votes ) PUBG Mobile VNG has launched gamers, but the version of PUBG Mobile Vietnam has only been released for mobile gamers, on PC is not official, but you can still Read more…

5 / 5 ( 3 votes ) Welcome To PUBG Console players for the best settings for the Pubg Xbox controller. after Controller Guide – Improvement Survey from a couple of months ago? It helped Read more…