Best Android Emulators for PC in 2020

In this article we are going to review – the Best Android Emulators for PC and laptops Windows 10, 8.1, and Windows 7, suitable also for weak computers. Why do you need them? – for an ordinary user for games or some individual applications, Android developers use emulators for comprehensive testing of their programs (the second part of the article presents Android emulators for developers ).

If you need to download an Android emulator and try running applications and games on the latest Windows computer, here are several ways to do it. In addition to emulators, there are other options for running Android applications on a computer, for example: How to install Android on a computer as an OS (as well as run from a USB flash drive or install into a virtual machine Hyper-V, Virtual Box, or another).

Note: for most Android emulators to work, it is required that Intel VT-x or AMD-v virtualization be enabled on the computer in BIOS (UEFI), as a rule, it is enabled by default, but if problems occur during startup, go to BIOS and check the settings … Also, if the emulator does not start, check if Hyper-V components are enabled in Windows, they may be causing it to fail to start. More about this: How to enable virtualization on a computer or laptop. 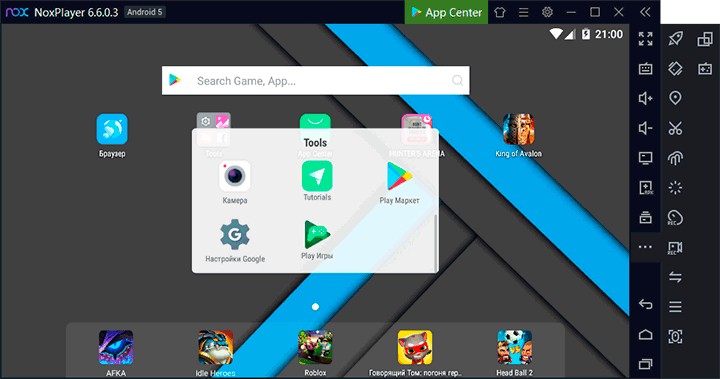 Nox Player is a very famous emulator with great user reviews. It is completely in Russian, is well compatible with a wide variety of games and, interestingly, allows you to use different versions of Android within the same emulator, which allows, if necessary, either install a newer version or if you have a weak computer or laptop, an older one. which may prove to be more productive on specific hardware.

Additional interesting nuances – support not only for Windows 10, 8.1 and Windows 7, but also the version of the emulator for Mac OS, themes, macro recording, full-fledged Russian interface language and, which is also important – official help in Russian, which is rare for such kind of products.

Another important detail: among all Android emulators that have been around for a long time, NoxPlayer is the one that, on average, has the best user reviews, and the share of negative ones is very small. Full review of the emulator and its features, official site: Android NoxPlayer Emulator (Nox App Player).

Bluestacks is probably the most famous and popular Android emulator: free, completely in Russian, regularly updated, and existing longer than other similar programs. 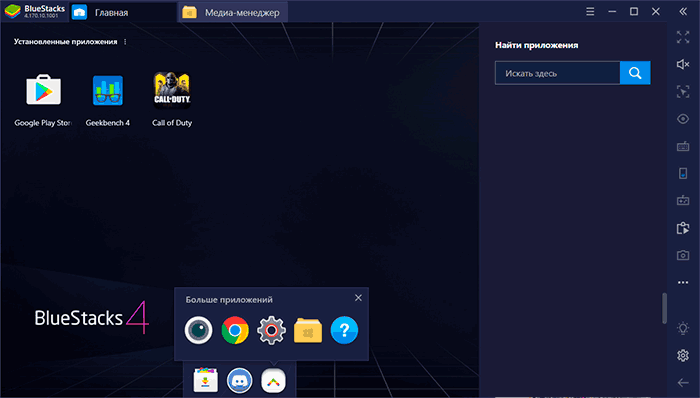 Among the advantages of the latest version of the Bluestacks emulator are:

At the same time, some users report that specifically on their devices Bluestacks shows lower performance than other emulators, although for my part I cannot confirm this: on my laptop with integrated graphics this emulator showed some of the best results.

LDPlayer is one of the best and most productive Android emulators for games, completely in Russian. Compatible with almost all modern games and applications.

Among the advantages of the emulator, in addition to performance and high FPS, even when using an integrated video card:

Otherwise, in the emulator you can find functions and settings similar to other such programs:

MEmu is one of the few free android emulators for Windows available with the Russian interface language, not only in the Android parameters but also in the parameters of the shell itself.

At the same time, the program shows a high speed of work, good compatibility with games from the Play Store (including when installing from APK) and useful additional features, such as sharing folders on a computer, binding keyboard keys to screen areas, GPS substitution, and the like.

A complete overview of MEmu, its settings (for example, typing in Cyrillic from the keyboard).

The Remix OS Player emulator differs from others in that it is based on Remix OS – a modification of Android x86, “sharpened” specifically to run on computers and laptops (with a Start button, Taskbar). The rest is the same Android, at the current time – Android 6.0.1. The main disadvantage is that it only works on Intel processors.

The advantages of XePlayer include very low system requirements and relatively high speed. Moreover, as stated on the developer’s official website, Windows XP – Windows 10 systems are supported, which is rare for emulators.

Another pleasant moment in this particular program is the high-quality Russian interface language out of the box, as well as support for input from the physical keyboard in Russian immediately after installation (this often has to be tormented in other emulators). Learn more about XePlayer, the specifics of its installation and operation.

At the end of 2016, in the comments to this article, a new android emulator for Windows began to be positively mentioned – Leapdroid. The reviews are really good, and therefore it was decided to take a look at the specified program.

Among the advantages of the emulator are: the ability to work without hardware virtualization, support for the Russian language, high performance, and support for most Android games and applications.

Koplayer is another free emulator that allows you to easily run Android games and applications on your Windows computer or laptop. Just like the previous versions, Koplayer works quite fast on relatively weak systems, has similar settings, including assigning the amount of RAM to the emulator. Well, the most interesting thing in this program is a very convenient keyboard setting for each game separately, and for the keys, you can assign gestures on the Android screen, accelerometer actions, pressing on certain areas of the screen.

Tencent Gaming Buddy is an Android emulator currently designed for a single PUBG Mobile game on Windows (although there are ways to install other games as well). The main thing in it is high performance in this particular game and convenient control.

Update: now it is a Gameloop emulator and supports not only PUBG but also Call of Duty Mobile and other games.

AMIDuOS is a popular and quality Android emulator for Windows from American Megatrends. It is paid, but for 30 days it can be used for free, so if at this point in time none of the options for launching android applications on a computer or laptop suits you, I recommend trying it, besides this option differs in performance and functions from others provided emulators.

Previously, AMIDuOS was available on the official website of the developer, now the emulator will have to be found on third-party sites since the official one was closed.

In the comments to this review of how to run Android on Windows, one of the readers suggested trying the new Droid4X emulator, noting the quality and speed of work.

Droid4X is a really interesting version of the emulator, which works quickly, allowing you to bind the coordinates of points on the screen of the emulated Android to certain keys on the keyboard of a computer or laptop (it can be useful for controlling in the game), equipped with the Play Market, the ability to install APK and connect Windows folders, change the location and other functions. Among the shortcomings is the program interface in English (although the OS itself inside the emulator immediately turned on in Russian).

As a test, I tried to run a relatively “heavy” game Asphalt on an old laptop Core i3 (Ivy Bridge), 4GB RAM, GeForce 410M. Works decently (not super smooth, but playable). Unfortunately, the official site of the emulator has ceased to exist, but if necessary, the emulator files can be found on the Internet.

This program with an uncomplicated name from Chinese programmers, as far as I could understand and see, is fundamentally different from other Android emulators for Windows. Judging by the information on the site, this is not emulation, but a porting of Android and Dalvik to Windows, while all the real hardware resources of the computer and the Windows kernel are used. I’m not an expert in such things, but Windroy feels faster than anything else listed in this article and less stable (the latter is forgivable since the project is still in progress).

You can download Windows Android from the official site (update: the official site is no longer working, WinDroy download is now available only on third-party sites), no problems were noticed during installation and launch (however, they say that not everyone starts), except that I was unable to switch the program to windowed mode (runs in full screen).

Note: install to the root of the disk, on thematic Russian-language forums there is a lot of information about Windroy.

YouWave for Android is another simple program that allows you to run Android applications on Windows. You can download the emulator from the site https://youwave.com/. The developers promise high compatibility and performance. I myself have not launched this product, but judging by the reviews on the network, many users are satisfied with this option, while some YouWave has the only thing that started from Android emulators.

5 / 5 ( 7 votes ) Unlock Gameloop Beta  To Android 7.1.2 Gameloop is an android emulator developed by Tencent. Gameloop was previously named Tencent Gaming Buddy. By continuing to use the same engine Read more…

4.8 / 5 ( 115 votes ) Gameloop (Tencent Gaming Buddy indir) 90 FPS unlocked is one of The Best Android Emulator For Windows PC. IT is created by Tencent Gaming Company for Playing Most Read more…